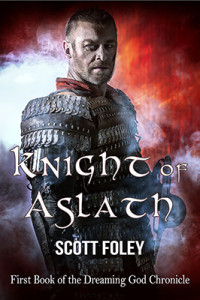 Knight of Aslath has now been released (hooray), and is now available in the following stores:

No book launch would be complete without some free stuff to give away. Enter now and you could win either:

If you register for my newsletter, you will also get a code for the paperback version to give you $4 discount off the retail price (£2.56 on today’s exchange rate). Oh, plus the first 3 chapters of Knight of Aslath as a free download.

Scott Foley is a British fantasy writer based in Manchester. He is author of Knight of Aslath and the Dreaming God Chronicle. Brought up on a steady diet of Tolkien, roleplaying games and a never-ending fascination with the question ‘what if?’, writing fantasy novels seemed the only sensible and worthwhile thing to do with his life. Knight of Aslath is his first novel, and he is currently working on the sequel Warlords of the Dreaming God. Both novels form the beginning of the Dreaming God Chronicle and are set in the fantasy world of Teth-Kiran. Knight of Aslath is available on Amazon, and you can find out more about Scott's work at: http://www.scottfoleybooks.com
« Fantasy genre news 13.7.15 » Fantasy genre news 21.7.15