I mentioned recently that a new fantasy map was being designed for Knight of Aslath by a talented Italian artist called Francesca Baerald. Well, it’s finally ready. Even having seen how good her work is I didn’t quite believe it would be this good. I will be interviewing her later this week so watch out for that. 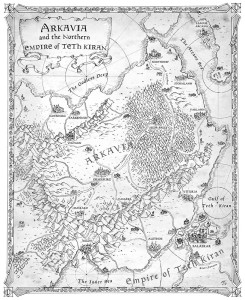 The fantasy map which will be included in Knight of Aslath shows the kingdom of Arkavia, a land under threat of invasion by neighbouring Tiragar to the west, and their allies the Temple of Shirith-Kah.

The Velderwood forms a barrier on the east, inhabited only partly by mankind and dangerous to travel in. Some parts of the Velderwood are home to an elder race of fae called the araquan, or ghosts, so named for their pale appearance and reputed ability to remain unseen by humans. Seidr Falls is the centre of their realm, a place no human has ever seen and returned from. To the south of the Velderwood, fierce ulegrym roam freely down out of the Balkithar mountains, threatening human and araquan settlements, and traders daring to travel through the forest.

Further east we reach the Far Coast region. In the northern part the treacherous Straits of Northdeep provide a channel between the Godless Deep and the Arcane Sea, so named for the presence of the League Arcana, the guild of magicians, upon one of its islands. Only the foolish seek the League, they discourage visitors and have summoned a raging tempest upon the sea for miles around. The Far Coast is attacked frequently by the northlanders, clans of wariors who seek to violently exploit the wealth and trade flowing through the Far Coast region.

These lands form the backdrop for the Chronicle of the Dreaming God. But much lies beyond them, and it time we will explore these lands too.