It’s time to reveal the cover for my first fantasy novel, Knight of Aslath. It’s been the topic of serious thought, research and work for months now. When I saw this photo it spoke to me straight away. This is Termaris, and here we are, face to face with the main character of the novel, who until now I could only see in my mind. Funny, he looks a bit like Sean Bean too. Who knew?

Hope you like the result. Any comments (good or bad) very welcome guys. 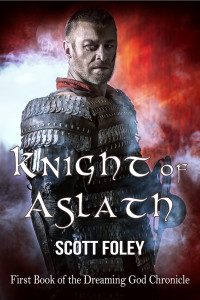