Mapping fantasy worlds: Arkavia and the northern Empire of Teth-Kiran

Many years ago I started drawing maps to visualize the places I was writing about, at that time mostly for role playing games but later for my novels too. I started with just pencil on paper, cities, fortifications, countries… continents. At one stage in my teens I even fancied being an architect I liked drawing plans so much. I loved being able to see something wonderful emerge from a blank page. I say wonderful not because I am a gifted artist (I stink at any other kind of drawing in fact) but because it turned an entirely new cog in my mind. Suddenly I could see these places in hard copy.

So in the early days of writing my novel, when my friend and colleague Holly mentioned this great fantasy map making software called Campaign Cartographer, I just had to buy it. Many hours of practice later I started mapping the continent of Teth-Kiran (the northern and southern landmasses which are the centre of my story). After having this under wraps for years it’s finally time to share some of it with you. It’s not entirely complete, but it will give you a better idea of the setting for the book.

The map below shows the kingdom of Arkavia, a land under threat of invasion by neighbouring Tiragar to the west, and their allies the Temple of Shirith-Kah. 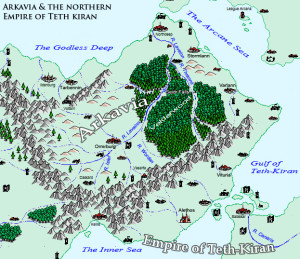 The Velderwood forms a barrier on the east, inhabited only partly by mankind and dangerous to travel in. Some parts of the Velderwood are home to an elder race of fae called the araquan, or ghosts, so named for their pale appearance and reputed ability to remain unseen by humans. To the south of the Velderwood, fierce ulegrym roam freely down out of the Balkithar mountains, threatening human and araquan settlements, and traders daring to travel through the forest.

Further east we reach the Far Coast region. In the northern part the treacherous Straits of Northdeep provide a channel between the Godless Deep and the Arcane Sea, so named for the presence of the League Arcana, the guild of magicians, upon one of its islands. Only the foolish seek the League, they discourage visitors and have cast a raging tempest upon the sea for miles around. The Far Coast is attacked frequently by the northlanders, a clannish race of men who seek to violently exploit the wealth and trade flowing through the Far Coast region.

These lands form the backdrop for the Chronicle of the Dreaming God. But much lies beyond them, and it time we will explore these lands too.

If you haven’t yet read the intro and extracts for Knight of Aslath, you can find them elsewhere on the blog.

Scott Foley is a British fantasy writer based in Manchester. He is author of Knight of Aslath and the Dreaming God Chronicle. Brought up on a steady diet of Tolkien, roleplaying games and a never-ending fascination with the question ‘what if?’, writing fantasy novels seemed the only sensible and worthwhile thing to do with his life. Knight of Aslath is his first novel, and he is currently working on the sequel Warlords of the Dreaming God. Both novels form the beginning of the Dreaming God Chronicle and are set in the fantasy world of Teth-Kiran. Knight of Aslath is available on Amazon, and you can find out more about Scott's work at: http://www.scottfoleybooks.com
« Dealing with writer’s block » Student of a long forgotten magic