Student of a long forgotten magic 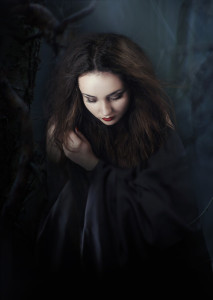 Ethné is one of the main characters in Knight of Aslath, a frustrated young woman of 19. She whiles away her days imprisoned (as she perceives it) in the tiny village of Torlenmere, deep in the Velderwood. Torlenmere welcomes few travelers and traders passing through, lying as it does across a minor, rather indirect path through the forest. Outside news is scarce. Exciting it is not, save for the occasional outlaw band attacking villagers caught outside the wall.

So much smaller this place must seem then, for a young woman trying to learn magic. Ethné’s uncle and guardian Jerechai is a master of mind magic, one of the Five Forms. She has been under his tutelage since an early age but is yet to master her skills. Continual failure is destroying her confidence, yet she knows she has a unique talent. It is extremely rare for a magician to create magic without being trained. But she did. She has few memories of her childhood, but she remembers times where she would move objects with her mind. Sense the thoughts of others. Or unleash fire by accident. These were long ago however, before the forest. Before Jerechai became her teacher and she learnt the control that now binds her talent in a seemingly iron grip.

Jerechai’s former student Jendis occasionally visits from the League Arcana, the magician’s guild across the sea. He brings her gifts, paper, ink, scrolls to study. He speaks with Jerechai late into the night in languages she doesn’t understand. Jerechai laughs light-heartedly when she asks what they talk about. But their secretive discussions will soon destroy her world and everything she knows. As a blood-red sun sets over the forest, Termaris and his mercenaries arrive in Torlenmere with a dire warning, and things change forever.

She is left with a golden vial of mysterious provenance. A creature from beyond the veil, sent to destroy it. And a dark journey which will lead Ethné to a power which once shaped the earth, sea and heavens.

Read Ethné’s first scene: A frustrated student of magic, or you can download some chapters for free.