Angels who walked with gods 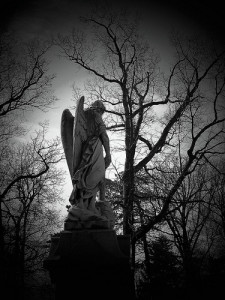 Macalla is an araquan, or as humans call them, a ghost. He owes a debt to Ethné’s uncle, Jerechai; one he will not speak of but which binds him to Ethné’s side as friend, guardian, protector.

Macalla’s sword Spiritsong and bow Starthorn are weapons of ancient make, alliances between spirit, steel and wood. He is an archer and woodsman without compare, able to hide his presence from even the birds and beasts of the forest. Yet in the vastness of the Velderwood he lives not with his own people but close to the human village of Torlenmere.

The araquan are an elder race, beautiful in an otherworldly fashion with skin as pale and flawless as virgin snow, white hair and grey almond-shaped eyes. The araquan speak to the spirits, seeing them in all natural things, from wind and streams to the rocks of the earth. These creatures are rarely seen among humankind but are tolerated, feared even – when they appear. The old tales speak of angels who walked with the gods, and in a ghost’s presence a man is reminded that greater powers than his walk the earth.