A warrior with a dark secret 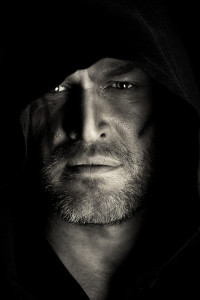 Termaris is one of the main characters of Knight of Aslath, a surly mercenary with a talent for killing. His small band once commanded the best money there was, but something has changed, and now he cares little for wars, death or even life. He is a man reaching the end of the road, hiding his past crimes from everyone around him. Everyone but himself.

The dreams are back, and so too is the bottle, to keep them at bay. His hands are tattooed red, swirling patterns covering every inch of skin, reminding him of oaths he broke long ago. If only he could drink those away too.

Coward, they call him now. Afraid to fight the invaders.

Locked in a cell after a drunken rage, he knows that the hangman’s noose is not far away, and he doesn’t care. An influential swordbroker offers him a deal which could bring him freedom, but the stakes are high. As he reaches the depths of the Velderwood, he realises his mission could lead either to redemption, or a final reckoning of his crimes.

Read Termaris’ first scene, or you can download some chapters for free.